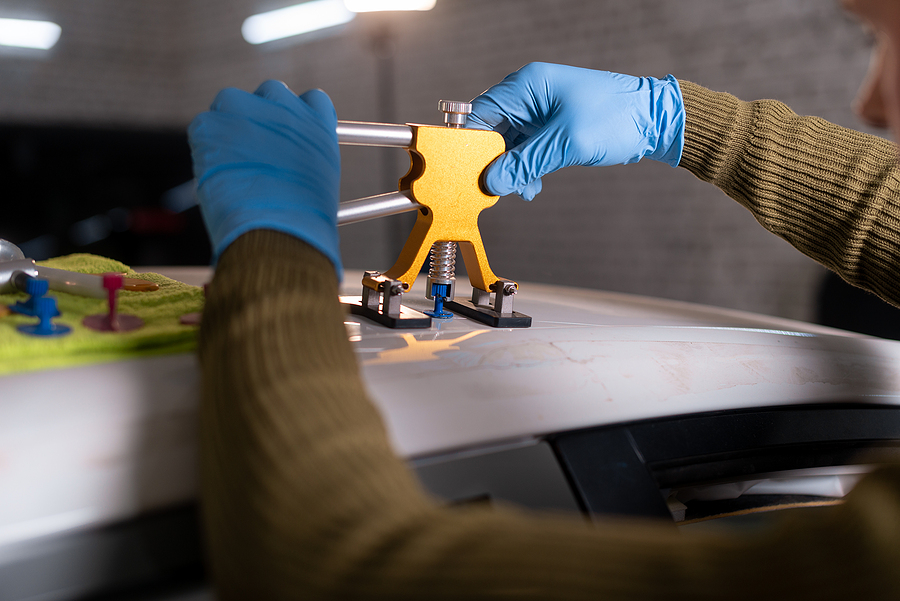 Fender benders, roll away shopping carts, and overly enthusiastic car door openers are all a part of life. With these, and other unfortunate events of this sort, come car dents!

However, just because dings and dents are a part of life, does not mean you have to settle for subpar car dent repair.

Traditional dent repair may have its place when you have severe vehicle damage that PDR can’t fix.

But for minor dents, PDR should be seriously considered as the cheapest, fastest, and easiest option.

1. PDR Is Much Faster Than Traditional Car Dent Repair

We live in an incredibly busy and fast-paced world. For many of us, taking precious time out of our day to go have a dent repaired may seem like another time-consuming task on our endless To-Do List.

And while that may be the case with traditional dent repair at some shops, PDR at Pristine Dent Repair is an incredibly quick process.

It can take anywhere from 30 minutes to a couple of hours.

Compare this to traditional dent repair, which could be several hours, a few days, or even over a week, and it’s no wonder PDR is the better option.

At Pristine we also offer services where we can come to your home or business and complete your Paintless Dent Repair while you go about your day.

Or you can drop your car off at the shop and pick it up later – this way your dents get fixed fast without taking up too much of your precious time.

2. PDR Can Save You A lot Of Money

Money speaks, and if you can have a high-quality repair for a fraction of the cost, why would you hesitate?

One of the big advantages of Paintless Dent Repair is that it does not take a lot of time, manpower, or equipment. This makes it much cheaper than traditional dent repair.

PDR can save you hundreds if not thousands of dollars when getting your car repaired.

Sometimes traditional dent repair is the only option, but when you have the choice, PDR is a more financially responsible decision.

3. PDR Can Offer Great Quality In Your Car Dent Repair

Quality level is an important factor in most anything. It is certainly important when it comes to your car.

Having dents fixed properly means not having to have them fixed again in a few years.

Proper dent repair also means your car will have better longevity and fewer issues down the road, such as rust and corrosion.

“…the quality of a repair with PDR techniques is superior to a traditional repair. Traditional dent repairs are subject to deterioration, discoloration, and reappearance if the filling material becomes dislodged. PDR eliminates these concerns.”

A big advantage of Paintless Dent Repair is that it is of great quality, and essentially returns your car to its original condition.

4. PDR Is Preferred By Insurance Companies

Even insurance companies see all of the great advantages of Paintless Dent Repair!

The companies prefer and are more likely to cover the whole payment when you get PDR rather than traditional dent repair.

When your insurance is more willing to cover your car dent repair with PDR, then you will have less hassle and save a lot of money.

Paintless Dent Repair keeps the vehicle’s original factory paint, along with the car warranty, which is preferred by insurance companies.

5. PDR Is Not Invasive Like Traditional Car Dent Repair

Traditional dent repair can be quite invasive and does not keep your car’s factory paint. At times this may be your only option.

However, whenever possible, PDR should be used for car dent repair. An advantage of Paintless Dent Repair is that it is not invasive.

According to Elim Dent,

“Consider this: You spend thousands of dollars to get your vehicle repaired only to get a poorly trained technician grind and sand off the perfect coat of paint from your vehicle and replace the superior quality exterior of your car with poor quality material.

Unlike conventional dent repair, PDR is a less invasive process and requires an exceptionally skilled person to do it. Offering you a true fix, it maintains the factory paint and provides a fix that doesn’t cause you any stress about the products used by the technician.”

If you are looking for a shop that can repair your car dents, at Pristine Dent Repair our trained experts are ready to help!